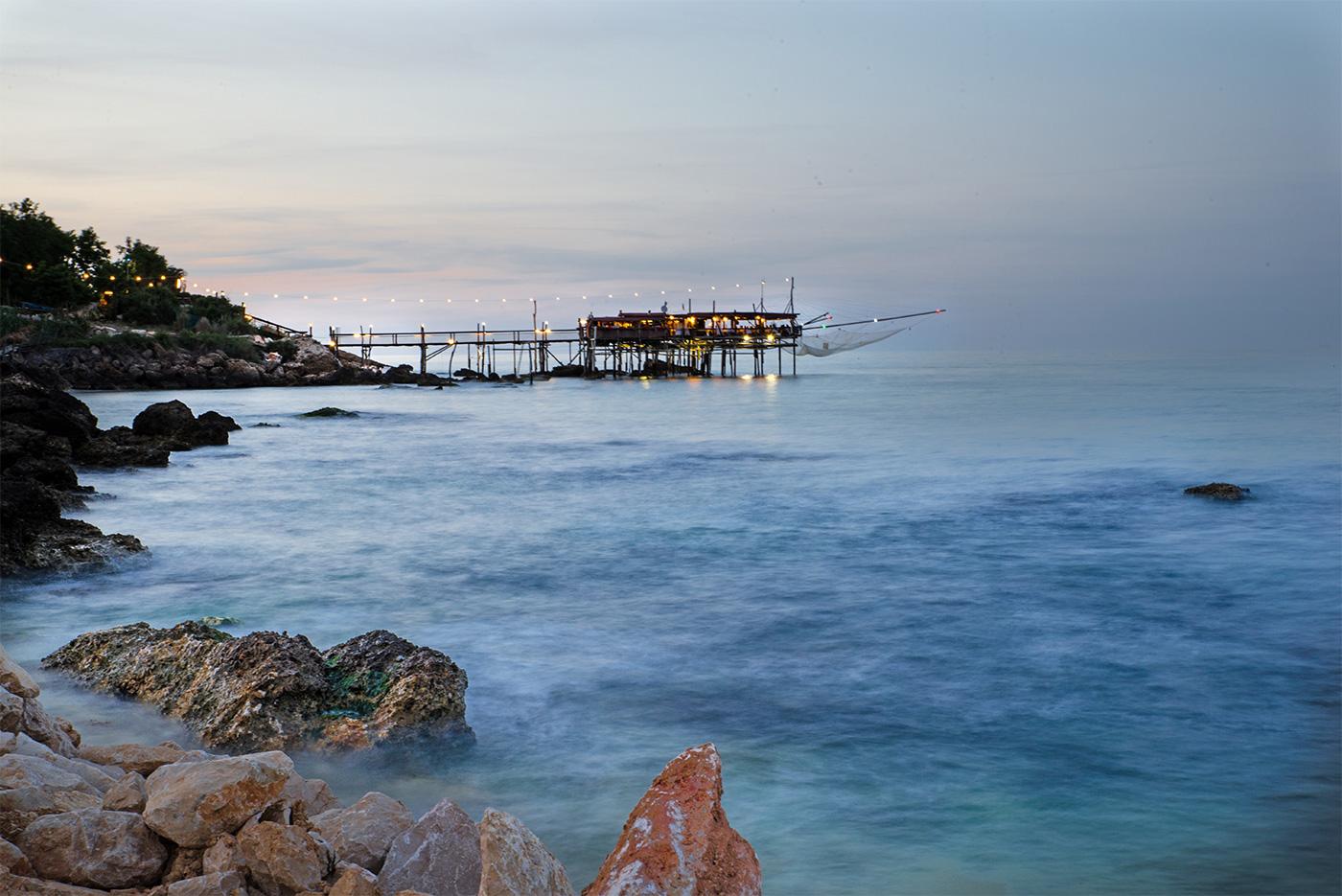 In the soul of the Costa dei Trabocchi

Walkways on the sea 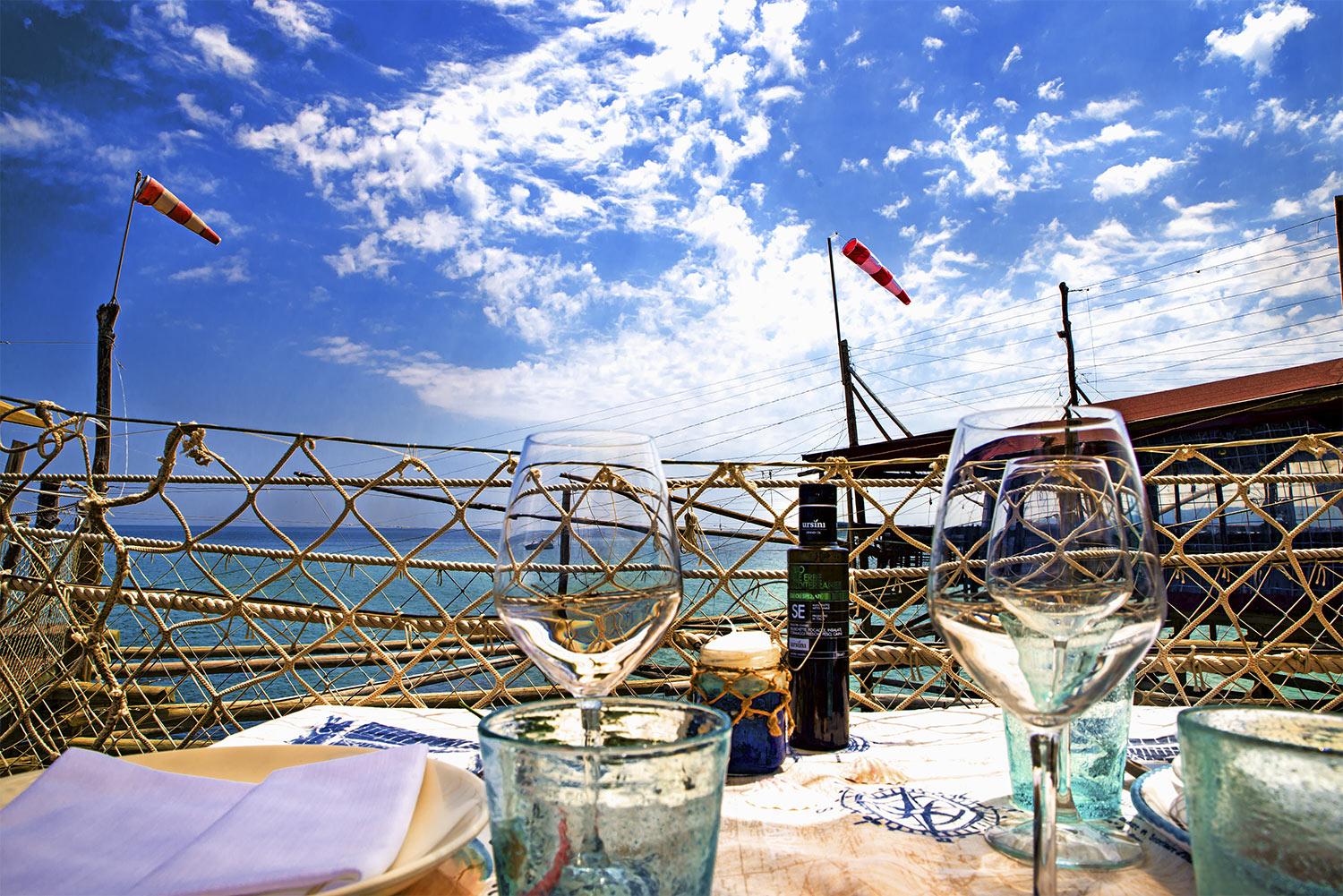 In the course of over two centuries, a lot of stories have been told and experienced by men on the Trabocchi. The pilings, that overlook to the Abruzzo’s coasts, have been invented by brave and strong men. Although in difficult times, thanks to their brilliance, they were able to live and sustain their families. Trabocco Punta Cavalluccio, Trabocco Punta Torre and Trabocco Spezza Catena belong to Verì family, the oldest family among “Traboccanti”. These men migrated from countries beyond the Alps. Especially we can found Verì’s family traces from the french passages and the Annecchini’s traces from Germany. Both the families took up residence to San Vito Chietino and after they moved along the coast.
Experts artisans, they used coastal trees and holm oaks in order to build a simple gangway. In this way they tried to harpoon fish from high. The deeds of “traboccanti” began with the figures of the Verì di “Scirocco”. They were dauntless builders and they improved the structures of the “trabocchi” with the study of low tides,the moon,the sea and its life. D’Annunzio alludes to Trabocchi in “The triumph of death” and in other poems, he talking about the Trabocco of Punta di “Turchinije” (1889). Over the years, the descendants of Verì moved from the coast of Turchina of San Vito Chietino to the southernmost Rocca San Giovanni where they manage three Trabocchi.
Today Tommaso Verì, “Tummasse di Scirocche“, give us the possibility to admire his inheritance of three Trabocchi: Trabocco Punta Cavalluccio “Lu Cavallucce”, Trabocco Punta Spezza Catene “Spezza Catene“, Trabocco Punta Torre “La Torre“. Still today Orlandino Verì and family, keep high the tradition of Traboccanti and culture to give us the opportunity to live and taste the real flavors of sea and our Abruzzo’s land. By booking, it is possible to visit the structures and eat suspended between sea and wind to experience exciting and unforgettable evenings.

This is how D’Annunzio expressed himself in a poem of 1875, referring to Tommaso Verì.

Octopus Salad, Sagnette with Pelosi, fried Squid and Anchovy, Stuffed Mussel and Peppered Mussels, are some dishes that you can taste. The dishes are prepared with Abruzzo’s ancient typical maritime recipes and with local fishing products. Skillful hands blend intense sea flavors, combine with great wines and an unforgettable location that will be the ideal setting for your “perfect day”.
The menu is offered at a fixed price of € 60.00 per person inclusive of wines on the menu, to taste the typical dishes of typical seafood cuisine on the characteristic wide platform suspended over the sea. Furthermore there is a wide wine list, more than 60 kind of wine. It’s necessary that you call us in order to have more information about the availability of the tables, that is limited.

Open from Monday to Sunday for lunch and dinner
until October